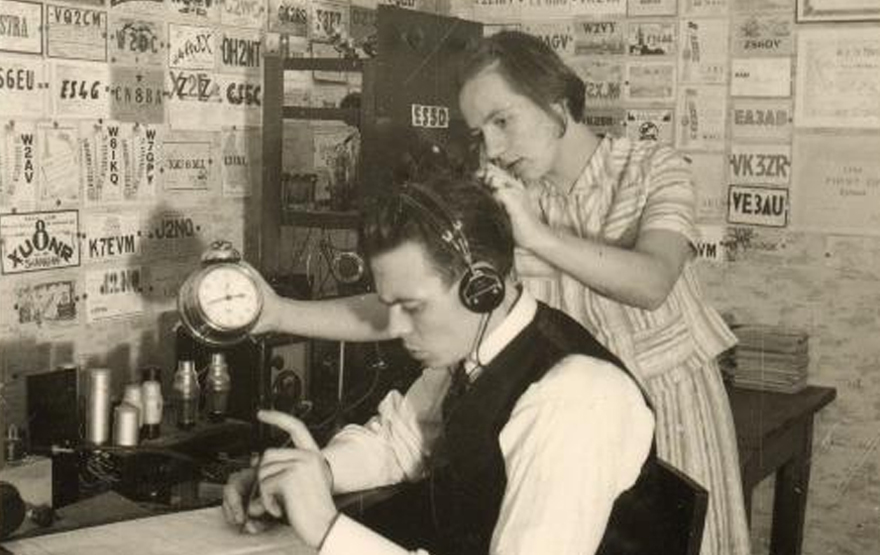 Back in the early sixties when I was a school-kid – long before our Bengali brethren were alienated by military-rulers and feudal politicians, and when the relations between the then East and West Pakistanis were sweet and friendly – my father, a young Signals officer in the army, posted in Dhaka for a couple of years, was given an assignment that was in addition to his normal duties.

As we all know the beautiful land of Bangladesh is unfortunately prone to terrific cyclones and floods, particularly along the coast of Bay of Bengal. These cyclones prove disastrous for the poor people of those areas. Thanks to cellular telephony and a flat terrain, now-a-days Bangladesh is one of the best cellular-covered countries in the world. But during those days, telecommunications had not developed so much and the entire burden fell on the wired Telegraph network which connected the administrative headquarters, breaking down more often than not. In the absence of reliable communications, it was not possible to provide any kind of early disaster warnings to the people of those “unserved” areas. Neither was it possible to get relevant timely information about developing cyclones from those areas. Similarly providing post-disaster relief always requires a working communications system to facilitate rescue, medical and aid workers.

Amateur Radio (also called “Ham” Radio) had been developing fast since the beginning of last century, used by hobbyists to get a thrill out of talking to strangers in far off places. A typical amateur radio “station” would be a small room cramped with short-wave radio transceiver equipment, with the operator crouching in front of a microphone, wearing headsets, scanning the ITU-allocated “short-wave” frequency band for any faint human voice (or Morse-code signals), coming from any direction. There were no satellite links employed for amateur radio, but “short-wave” frequency bands made it possible to be heard over considerable distances, albeit not always very clearly because of the constant crackling sounds from the ionosphere.

Every Amateur radio network (or “Club”) had a name, and every radio station had a “Call Sign” (consisting of alphanumeric characters following a convention). Whenever two amateur radio operators sitting in different parts of the world made contact with each other and could hear well enough to understand each other’s postal addresses, they would exchange post-cards via the postal service. Amateur operators had individual postcards specially printed, which carried the name of the Club and their individual Call Sign. All received cards were displayed on the walls of the “radio station” by the recipients as trophies.

With the passage of time, amateur radio operators started discovering other innovative and useful applications of this technology. They discovered that amateur radio could also be used for a myriad of services, among those: saving lives. By then the size and power requirements had come down, so it became possible to deploy radio in the field rather quickly. Seeing these advantages the government decided to deploy an amateur radio network across East Pakistan, to be used mainly for communications to/from the areas prone to cataclysmic natural disasters. In normal times it would be used to promote understanding among the people.To develop such an amateur radio network, was the task that my father was given

I remember during the time the network was being established, and also later during its 24/7 operation, he had to travel several times (by train and steamer boats) to places like Chittagong, Cox’s Bazar, Khulna and Jessore. “The Tiger Amateur Radio Club” (it was named after the famous Bengal tiger), was inaugurated by General Khwaja Wasiuddin, who presented a “Charter” to the club, in August 1963.

Being the eldest child I (and my younger brother Javed Iftikhar) had the privilege of occasionally accompanying him to the newly setup Dhaka amateur radio station, where he had to frequently go in the evenings. He would always try to explain to us how things worked.

We left Dhaka soon after that but up to the 1965 war one kept hearing how helpful the Tiger Amateur Radio Club was in providing relief efforts. I have no idea what happened subsequently, but my father did receive a “Commendation Certificate” from the government, for his “meritorious services” in setting up the network. The Certificate hung, framed, at our home for a long time.

As a student of class-4 I can vividly recollect all these things (I even remember the call sign of Dhaka radio station, which was AP5CP) primarily because my father tried to ensure that we learned from his experiences. I remember that one day when I asked him about this ‘thing’ called radio frequency, he took a paper and a pencil and explained it all to me in terms so simple that I can never forget. In fact that was my first lesson in telecom engineering!

The first time two amateur radio enthusiasts talked to each other across the Atlantic, a watershed event in the history of Amateur Radio,  had been in the year 1923 – the year my father was born! Exactly forty years later he helped establish an amateur radio network for communications to/from unserved areas. Little did I know that after another forty-four years I would become the founding CEO of USF Pakistan – which would start my own love-affair with providing telecommunications in the unserved areas!

21 thoughts on “Childhood and Universal Service”