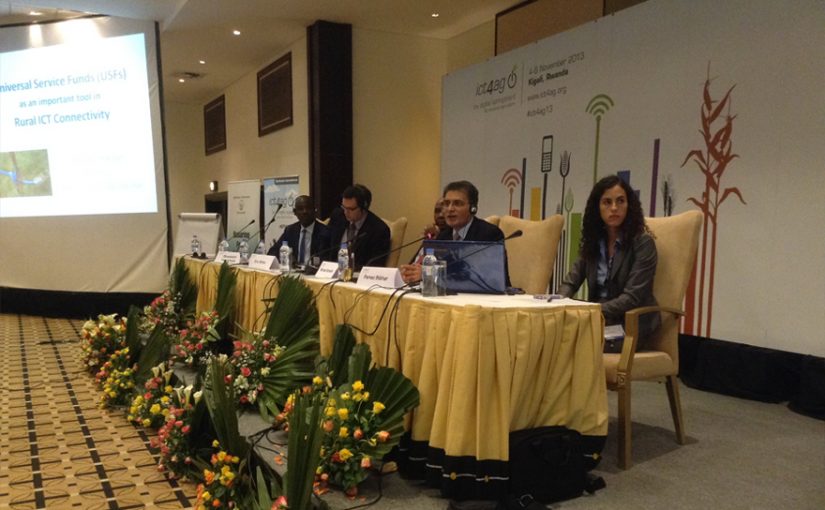 I was in Rwanda (3 – 9 Nov. 2013) on the invitation of CTA (French acronyms for “Technical Center for Agricultural and Rural Cooperation” – www.cta.org) to the 4-day ICT4Ag (ICT for Agriculture) conference to speak on the importance of Universal Service Funds in providing connectivity to rural areas. My presentation (together with two others) was followed by a question-and-answer session in the ballroom of Serena Hotel, the biggest in Kigali (yes, its not only in Islamabad!). All African countries were represented, with experts from several non-African countries too (notably India). In all, more than 300 delegates from 61 countries were there. I was the only one from Pakistan and personally for me it was a great learning experience, like attending a 4-day crash course on ICT4Ag!

I thought it was a huge event for a small country like Rwanda (population 11 mil). But I was astonished to know that just a few days ago there had been an even bigger “Transform Africa Summit” (TAS) with 1,500 delegates, where they resolved to transform Africa using the power of ICTs. TAS was co-chaired by Rwandan president Mr Kagame and Secretary General ITU Dr Toure.

Mr Kagame has been the president of Rwanda since 2000 and although democratically elected, he is somewhat controversial and is known more as a “benevolent dictator”. But I heard only praises for him from Rwandans. Under him the country has grown at an average annual growth rate of 8%. His cabinet-team is known to be very competent. We saw a glimpse of their dedication during the four days, when the Minister of Agriculture and the Minister of IT and Youth, were present for a large part of the time. During her speech at the gala-dinner the Agriculture Minister told us that the IT Minister was originally a software engineer! I think combining Ministries of IT and Youth is also an idea worth following. The two go together!

After my presentation, I had the chance of discussing with Mr Steve Mutabazi, the ‘ICT Strategist’ of Rwanda Development Board, about the recent decision that the entire telecom infrastructure (fiber cables as well as LTE last-mile delivery infrastructure) will now belong to one single state-owned company in partnership with Korea Telecom. Private Sector Service Providers will be able to compete but will be using the same infrastructure. He explained their reasons, that primarily it will prevent duplication of infrastructure and make the operators invest in services. The contract with Korea Telecom for this unique enterprise is for 25 years. It will surely be very interesting to watch it over the years.

Other than ICTs, Education gets a big importance in Rwanda. 17% of their national budget is reserved for Education, which is free for 12 grades, with medium of education being English from 4th grade onwards. As could be seen in this conference Agriculture is also high on the list of priorities. Rwanda is considered a model in how the aid money should be spent for development of people as a whole, rather than a few. Even otherwise, despite construction going on at many places, Kigali looks very clean (eg: I did not see any over-flowing garbage bins). Roads have no potholes – although roads leading to the villages are not metaled. Obviously many more roads still need to be built.

The ICT4Ag Conference had three parallel streams and the emphasis was more on inter-active discussions and less on power-point slides. Most of the presentations and the following discussions were truly thought provoking. I found the sessions about ICT-based Commodity Exchanges and the likes of “iCow” (SMS based information and education platform), “Esoko” (mAgric platform for tracking and sharing market intelligence) and “Trac FM” (interactive radio talk shows with parallel SMS polls), particularly interesting. There was also a small exhibition going on which showcased several initiatives and ICT4Ag products.  Apart from all that, there were two very interesting items.

The first one was the very useful ICT4Ag App, for smartphones, which the participants were asked to download. The App provided every piece of information about the conference, continuously updated with any announcements and changes in program etc. And since free WiFi was always available, the App freed us from carrying multiple documents.

The second special item was the “Hackathon”, a contest between teams of ICT professionals from various African countries, competing to create the best – and sustainable – Apps for Agriculture.  This had to be done within three days. On the fourth day they had to make presentations about their Apps, including their business models, and answer piercing questions by the judges. The winning team got 3,000 Euros plus another 3,000 promised to cover costs of initial running of their newly developed App in real world.

The 5th day was reserved for field trips, where they proudly showed us ICT4Ag development projects under way. Participants were sent descriptions of nine separate trips in advance so that we could choose what we wanted to see.