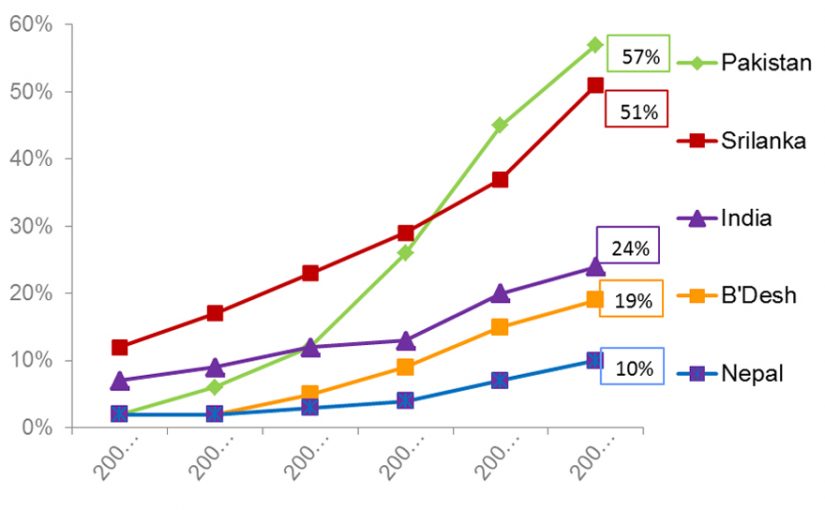 As part of my presentation at e-India 2008, in New Delhi, when I proudly presented the slide of regional telecom development showing Pakistan ahead of all, 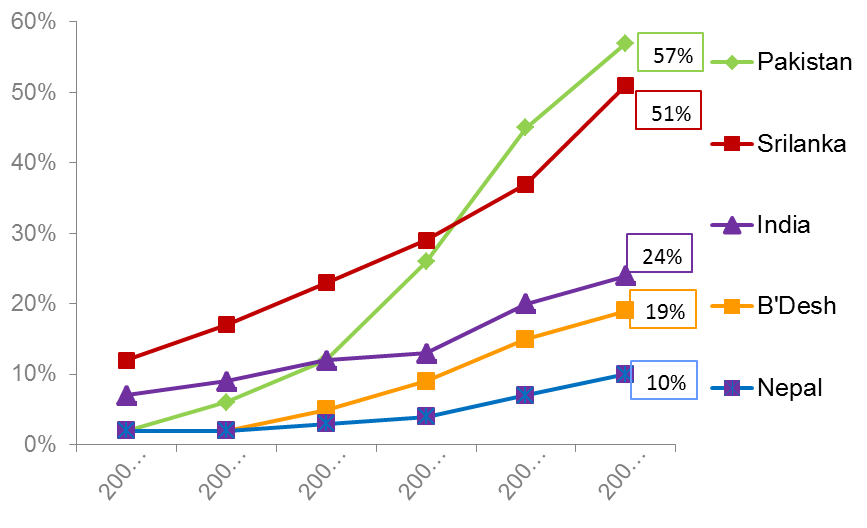 little did I know that it was in fact the beginning of a long era of stagnation for Pakistan telecom. Thereafter, where the Sri Lanka teledensity soared from 51% to nearly 100%, Indian teledensity from 24% to 75%, Pakistan crawled from 57% to 75%.

There had been many reasons of the success story at that time, but the telecom policies (there were several – Cellular Mobile Policy, Broadband Policy, USF Policy, etc.) and reforms of 2004 were at the top. Those policies and reforms were probably the best things that could happen to a sector in a country. But these policies were supposed to have a lifespan of five years. Nothing happened for the next ten long years.

Therefore the biggest achievement of the present government in the field of ICT will not be the 3G/4G auction, nor winning the seat in the administrative council of ITU, it will rather be formulation of new ICT policies, in consultation with the stakeholders. We are not there yet, but work is underway to formulate a telecom policy, with the assistance of an international consultant, funded by the World Bank.

A couple of rounds of stakeholder consultations have been held and it appears likely that the new telecom policy will soon see the light of the day and set Pakistan’s telecom development on the right trajectory to re-gain lost glory. Some of the elements that are important in that context are discussed briefly below.

No amount of spectrum is enough, particularly for our last-mile needs. But spectrum should  not be too expensive for our consumers, as it is they who pay for it in the end. The last spectrum auction of 3G and 4G in April 2014, though successful in many ways, did leave much to be desired in that respect. How? For another few years wireless broadband would not be available to a majority of our people (more than 60% live in rural areas). Lax operator license roll-out obligations allow that to happen because government’s focus on getting upfront cash was too high on the agenda. Pakistanis’ hunger for broadband can be gauged from the claims of cellular operators, that 3G users in cities have crossed 3 million mark – effectively equaling the number of broadband subscriptions in the country  – in less than six months!

Spectrum policy needs other drastic improvements as well, like in spectrum trading and re-use, so that situations are avoided where precious spectrum is lying unused on one side and some operators are craving for it on the other.

If spectrum is needed for the last-mile, Optic Fiber Cable OFC) connectivity is needed for the backhaul. It is impossible to provide inclusive development to our burgeoning population without the help of ICTs. Fortunately computing power of the devices is doubling every year and prices are tumbling. According to well-respected technology research firm IDC, Smartphones are already replacing PCs and Laptops. On the other hand videos, which are the most effective way to teach our villagers, are bandwidth-hungry. Therefore massive amount of bandwidths will be required in the backbone/backhaul networks, which is only possible through OFCs.

Thus any future rapid inclusive economic development depends on increasing the fiber penetration in the country. That is why it was expected that ‘Fiber to Tehsil’ program of USF would be followed by a program of ‘Fiber to Union Council’ – for all of the six-and-a-half thousand Union Councils!

There are all kinds of indirect taxes in Pakistan but the usage tax on telecom is one of the worst. It directly impacts use of ICTs by the poorest sections of the population. A large proportion of this tax is adjustable in the annual income tax – exactly what the poor cannot do, ironically because they are supposed to have been exempted from taxes! These days phones (particularly smartphones) are considered to be productivity enhancing tools. To discourage their usage, by charging high usage tax, amounts to putting breaks on productivity enhancement, and thus detrimental to inclusive economic growth

The story of USF has been the same as telecom. On 7th May 2010, Indian newspaper ‘Business Line’ (belonging to ‘The Hindu’ group) headlined: “Pak ahead of India in use of Universal Service Funds”  (http://www.indiapress.org/gen/news.php/Business_Line/). Among other things, Pakistan was among the first ones in the world to start using USF for optic fibers. Our neighbours followed us and today they are extending fibers to each of the 250,000 “Gram Panchayats”. Now its our turn to emulate. With nearly a billion dollars in the kitty of USF Pakistan, a little bit of will and some hard work is required. The government announced a program of 500 broadband telecenters half a year ago. Something is better than nothing if it is not so painfully slow in taking off. As for ICT R&D, little said the better. After all what can one say about an organisation where, in the last four years, there was a full-time CEO for only half a year? In both cases the industry representatives cannot be absolved of it’s responsibilities.

Doing all that above is suggested would just be a big waste unless there is useful content that can educate and enhance the skills of the masses. Educate not just in the conventional sense but also teach modern techniques in agriculture, farming, livestock, commerce, fish-farming, growing fruits and preserving them for home and foreign markets, how to setup and run businesses, how to live hygienically, to name just a few of the endless possibilities.

Content is not the responsibility of IT ministry alone. Other ministries – both federal and provincial – have to play their part. To give an example – Agricultural ministries/departments have got substantial rural presence with thousands of field workers who help/guide/teach the farmers. Now with ICTs they can be made more effective by providing them with smartphones, pre-loaded with videos which demonstrate those new ways and methodologies that the farmers need to learn. In future, as smart phones and mobile broadband become more pervasive, farmers would be able to download such videos themselves whenever and wherever required. Such videos can only be prepared by our local specialists of agricultural with the help of public/private sector IT experts – not by IT experts alone.

The government’s role does not end here even. There is enough evidence available that ICT development comes when the governments themselves become 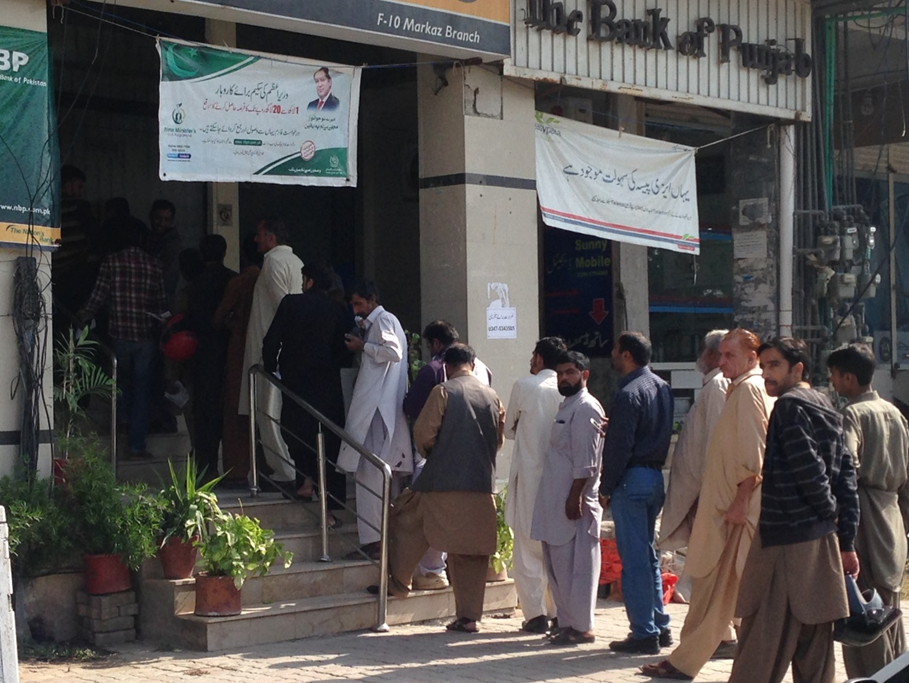 the biggest users of ICTs. Federal ministry of IT is working to spread use of eOffice in all federal ministries. But use of ICTs in the government has to take a quantum leap – from eOffice in a handful of ministries and mere downloading of some Forms by the citizens, to complete eGovernance. As many transactions between the citizens and the governments should start taking the broadband route.

Take the example of Branchless Banking: why cant we pay government dues, like annual vehicle tax or abiana, through mobile banking? Why must we spend our precious hours standing in queues (or pay someone to do so) to pay government dues?

It is not that no such content development work for egovernance is being done in Pakistan. Some provinces are doing better than others. But most of it appears to be carried out in piecemeal manner (look at vehicle number plates of different provinces, they appear to come from different countries), and none of the work is being shared among the center and/or provinces.

There seems to be no effort to learn from each other, replicate or avoid duplication, and thus waste. There is an on-going ITU/NIPA (South Korea) assisted initiative of an eGovernment Masterplan (of which I happen to be a part from the ITU side) but that deals only with the federal government. Comprehensive nation-wide medium/long term egovernment plans must be formulated and implemented by the center and the provinces jointly, which is only possible if the top leadership takes ownership and pushes for implementation.

Indeed all this would take years, but we need to hasten up so that we can again start proudly presenting Pakistan ahead of others! 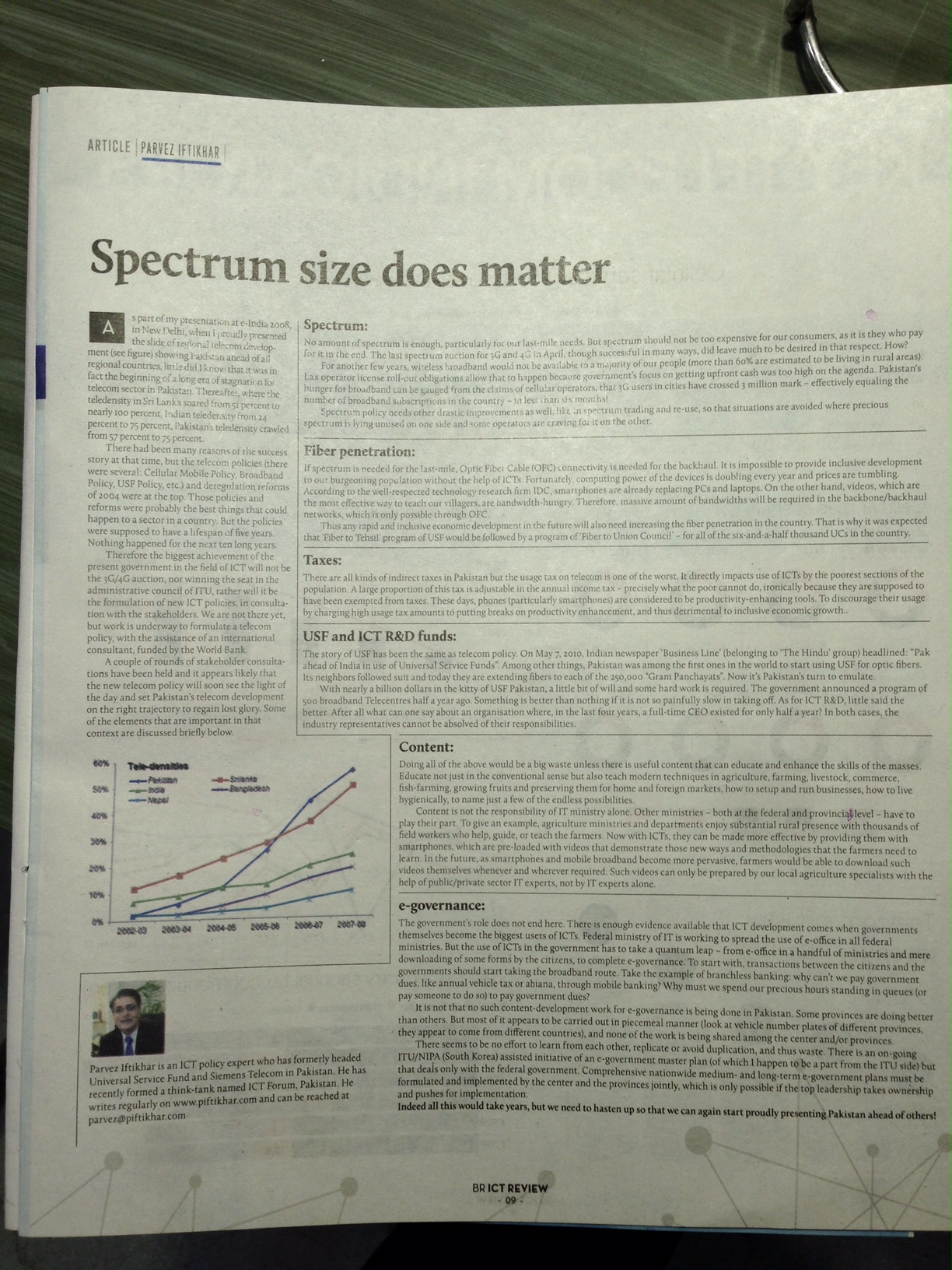 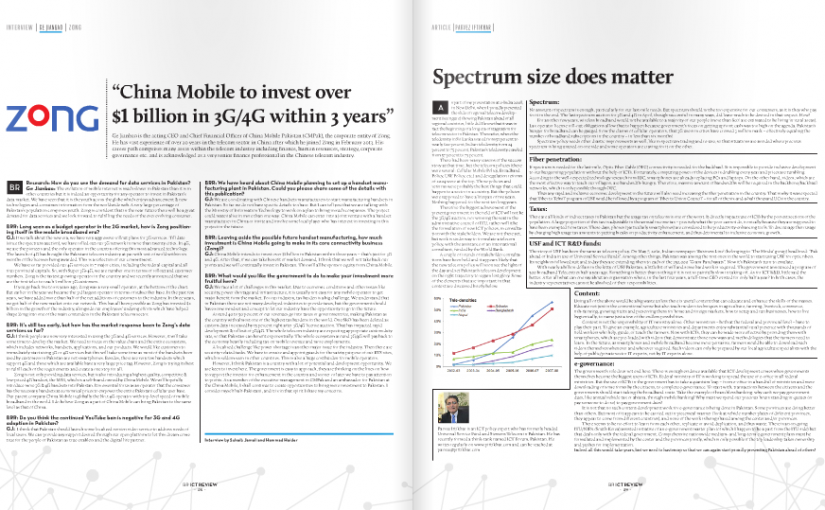