I must admit I had never heard about the Universal Service Fund (USF) until I met Parvez Iftikhar at Kuala Lumpur airport. We were both headed for the World Congress of IT where Parvez was going to be presenting the USF success story (sharing the stage with none other than Craig Barrett, the CEO of Intel Corporation). 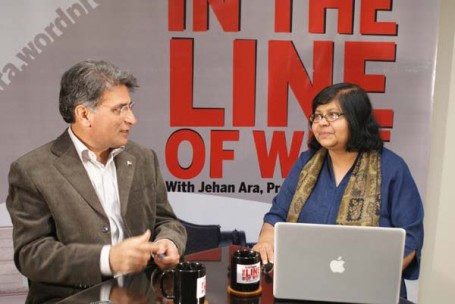 I don’t know if he was excited at the prospect. He seems to be someone who has his feet firmly on the ground. I, on the other hand, always have my feet a few inches in the air at least so I was totally excited that Pakistan was being used as a successful case study. Parvez did a terrific job of showcasing the project in front of the thousands of WCIT delegates. I was so proud.

When Parvez came to Karachi a few weeks ago to sign a deal with Wateen for WiMax to be made available throughout Sindh, I could not miss the opportunity of dragging him onto the set of “In the Line of Wire” and firing all sorts of questions at him. In this conversation, Parvez demystifies the Universal Service Fund for us, tells us why it was set up, what it is doing and what the plans are for the future. Do watch the whole episode because there are certain projects that the USF is planning to launch that could be of interest to some of you youngsters out there, or to women.

In this picture, you see Rabia loading Parvez down with all the magazines that CIO Pakistan publishes.

And in this other picture, she seems to be horrified that he has never seen a copy of CMO. I am sure she will get get back at him by doing a cover story on him in that particular magazine. Poor Parvez – caught in the evil web!